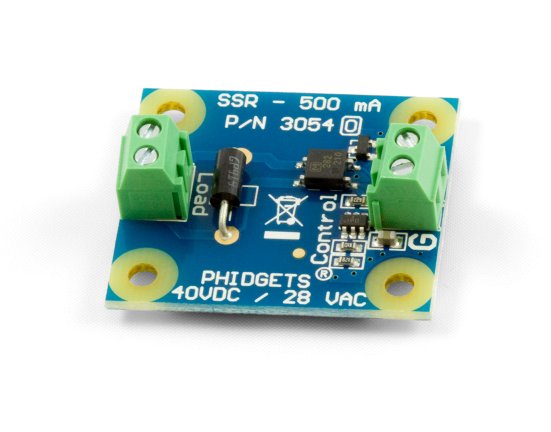 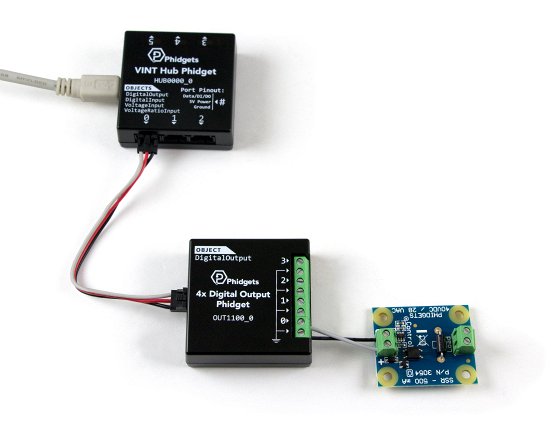 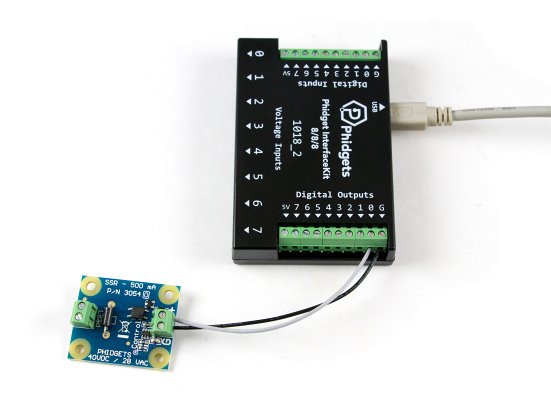 SSR Relay Board 0.5A

Mature: This product (or a similar replacement with a compatible form, fit and function) will be produced as long as the parts and components required to make it are available.
Rated for 28VAC/0.5amp or 40VDC/0.5amp switching, this SSR is controlled by a digital output.

For new systems and projects, we recommend using the following VINT product instead of this one.

Solid State Relays, or SSRs, are devices designed to operate like standard relays but without mechanical motion. By simply providing a small voltage to the control side of the circuit, you can open or close a higher powered circuit on the load side.

The SSR Board is safe to use with sensitive control devices like microprocessors, and will not damage a Phidget device or your PC. Optoisolation between the control inputs and outputs of the SSR in the form of an LED paired with a set of optically-controlled MOSFETs provides protection from output to input. An on-board diode across the relay output protects the board from static electricity and surges from inductive loads.

This SSR board can be controlled with a 5V digital output. For more details, see the Connection & Compatibility tab.

You can protect your board from dust and debris by purchasing an enclosure. An enclosure will also prevent unintentional shorts caused by objects touching the pins on the bottom of the board or any terminal screws.

Welcome to the 3054 user guide! In order to get started, make sure you have the following hardware on hand: 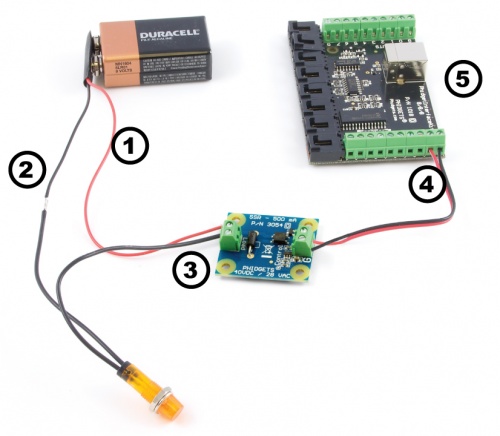 Now that you have everything together, let's start using the 3054!

In order to demonstrate the functionality of the 3054, we will connect it to the 1018, and then run an example using the Phidget Control Panel on a Windows machine.

Linux users can follow the getting started with Linux guide and continue reading here for more information about the 3054.

After plugging in the 3054 into the 1018, and the 1018 into your computer, open the Phidget Control Panel. You will see something like this: 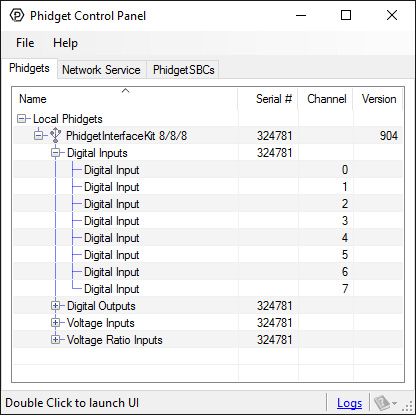 Solid State Relays, or SSRs, are devices designed to operate like standard relays but without mechanical motion. Built instead out of silicon transistors, SSRs allow currents and voltages to be switched by simple digital signals from a microprocessor or any other device that can supply the small amount of current needed to activate the SSR’s internal switching mechanism. For more information on solid state relays, refer to the SSR Primer.

The 3054 is safe to use with sensitive control devices like microprocessors, and will not damage a Phidget or your PC. Optoisolation between the control inputs and outputs of the SSR in the form of a GaAs LED paired with a set of optically-controlled MOSFETs provides protection from output to input. An on-board 47V bidirectional transorb across the relay output protects the board from static electricity and surges from inductive loads.

Using the SSR Board

Using the SSR Relay Board in your application is typically done according to the diagram below, though there are other implementations for it as well. 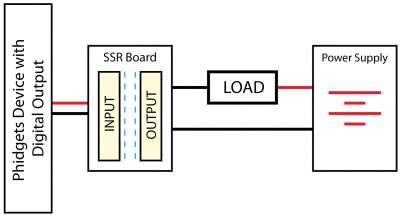 This device doesn't have an API of its own. It is controlled by opening a DigitalOutput channel on the Phidget that it's connected to. For a list of compatible Phidgets with Digital Outputs, see the Connection & Compatibility tab.

You can find details for the DigitalOutput API on the API tab for the Phidget that this relay connects to.