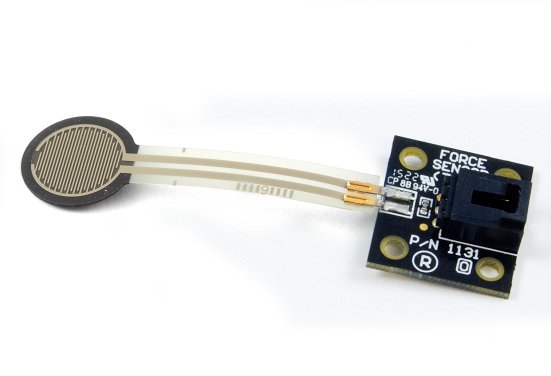 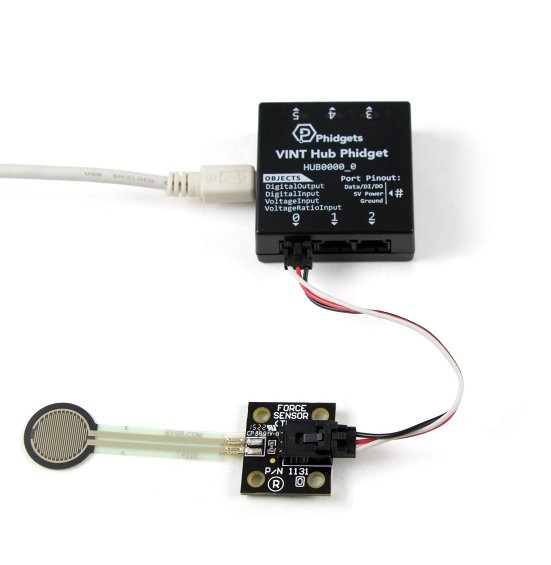 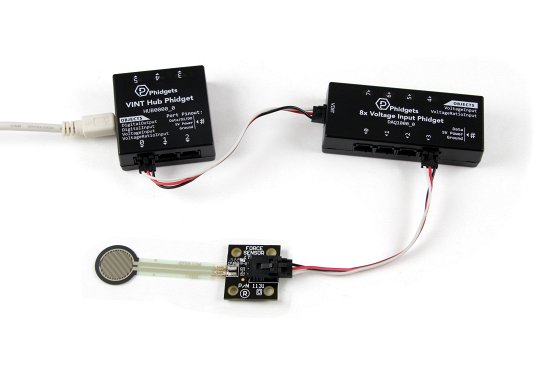 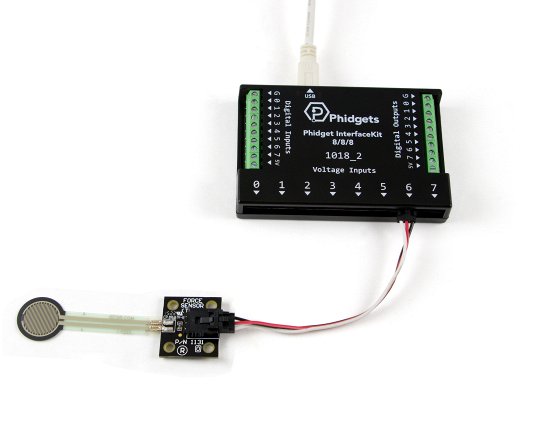 ID: 1131_0
This FSR comes with an adapter board already attached for convenience. Measures up to 2 kg of force.
Discontinued

With its paper-thin construction, flexibility and force measurement ability, the Thin Force sensor can measure force between almost any two surfaces, up to 2 kg.


Force Sensing Resistors (FSRs) are very thin, robust, polymer thick film (PTF) devices that decrease in resistance when increased pressure is applied to the surface of the sensor. FSRs are not a load cell or strain gauge devices though they have many similar properties.

They are more appropriate for qualitative rather than precision measurements.

This sensor can be read by any Phidget with an Analog Input or VINT Hub port. It will connect to either one using the included Phidget cable. VINT Hub ports can behave just like Analog Inputs, but have the added flexibility of being able to be used as digital inputs, digital outputs, or ports to communicate with VINT devices. For more information about VINT, see the VINT Primer.

This sensor comes with its own Phidget cable to connect it to an InterfaceKit or Hub, but if you need extras we have a full list down below. You can solder multiple cables together in order to make even longer Phidget cables, but you should be aware of the effects of having long wires in your system.

Welcome to the 1131 user guide! In order to get started, make sure you have the following hardware on hand: 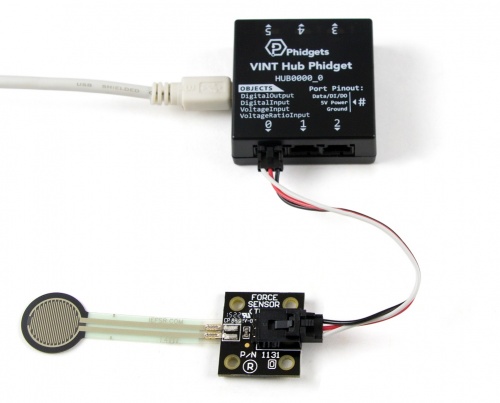 Now that you have everything together, let's start using the 1131!

In order to demonstrate the functionality of the 1131, we will connect it to the HUB0000, and then run an example using the Phidget Control Panel on a Windows machine.

Linux users can follow the getting started with Linux guide and continue reading here for more information about the 1131.

After plugging in the 1131 into the HUB0000, and the HUB0000 into your computer, open the Phidget Control Panel. You will see something like this: 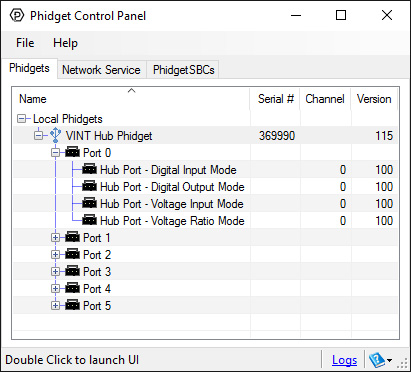 Double-click on a Voltage Ratio Input object in order to run the example: 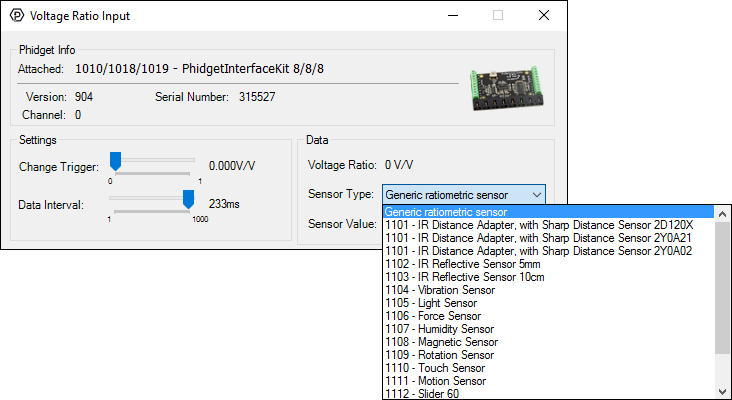 The Phidget libraries can automatically convert sensor voltage into force (grams) by selecting the appropriate SensorType. See the Phidget22 API for more details.The Formula to translate voltage ratio from the sensor into a force in grams is:

To ensure the most accuracy, a small disc (included) can be placed directly on the sensing pad before applying force to the disc. This will ensure that all the force is applied directly to the sensing pad and not to the surrounding surface. The longer the object rests on the sensing pad, the more the voltage will drift and increase slowly in value. It is very difficult to compensate for the drift since different constant forces will produce different drift rates. For this reason, the average accuracy of this sensor is within 10% of the true value. The formula above was determined after the object with a known mass was resting on the sensing pad for 15 seconds. The general drift rate curve is logarithmic with time.

Set up a Repeatable and Reproducible Mechanical Actuation System

matched to the final use conditions. The greater the cycle-to-cycle consistency of these parameters, the greater the device repeatability. In human interface applications where a finger is the mode of actuation, perfect control of these parameters is not generally possible. However, human force sensing is somewhat inaccurate; it is rarely sensitive enough to detect differences of less than ± 50%.

When a repeatable and reproducible system has been established, data from a group of FSR parts can be collected. Test several FSR parts in the system. Record the output voltage at various pre-selected force points throughout the range of interest. Once a family of curves is obtained, a nominal force vs. output voltage curve and the total force accuracy of the system can be determined.

Use Part Calibration if Greater Accuracy is Required

For applications requiring the highest obtainable force accuracy, part calibration will be necessary. Two methods can be utilized: gain and offset trimming, and curve fitting.

This device doesn't have an API of its own. It is controlled by opening a VoltageRatioInput channel on the Phidget that it's connected to. For a list of compatible Phidgets with VoltageRatio Inputs, see the Connection & Compatibility tab.

You can find details for the VoltageRatioInput API on the API tab for the Phidget that this sensor connects to.

Have a look at our FSRs: