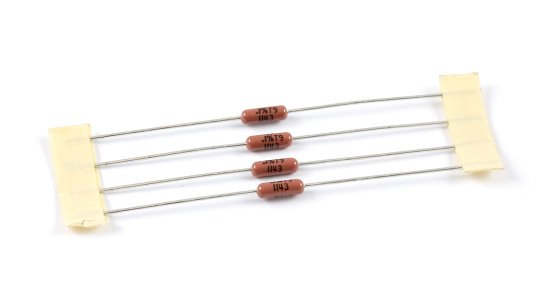 ID: 3175_0
Use these precision resistors to interface an RTD with the PhidgetBridge with maximum accuracy.
Discontinued

The 3175 RTD Resistor Kit includes four pieces of 1.00 KiloOhm resistors. These precision resistors were used to interface Platinum RTDs to the 1046 – PhidgetBridge . This configuration has been obsoleted by the TMP1200 - RTD Phidget, which can interface with RTDs without the need for external resistors. If you still need precision resistors, you can find them at electronic component suppliers such as DigiKey.

Platinum RTDs (Resistive Thermal Devices) are used to make very precise temperature measurements. RTDs are very accurate, and will measure temperatures up to 500 degrees Celsius. The electrical resistance of the RTD changes predictably with temperature, and RTDs are the most accurate commonly available temperature sensors.

Measuring the resistance of an RTD requires accurate components all through the system - otherwise there is no point in paying for an RTD. The resistors in the 3175 RTD Resistor Kit have a worst case error of 0.1% - translating to a typical temperature error of 0.05 Celsius. The resistors also change their resistance very little with temperature - ambient temperature variation is a significant source of error for thermocouples. RTDs with a well designed data acquisition system will not be subject to these temperature variation errors. 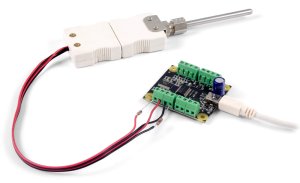 Read the RTD Interface Kit user guide to get detailed instructions on how to construct and test the bridge. 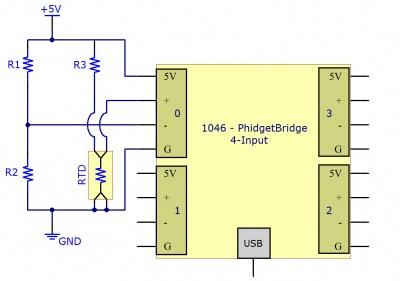 This diagram shows how to connect the RTD to a Wheatstone bridge, and then to a PhidgetBridge 4-Input.

is the Bridge Value given by the PhidgetBridge (in mV/V) , and

are the resistances of the known resistors. 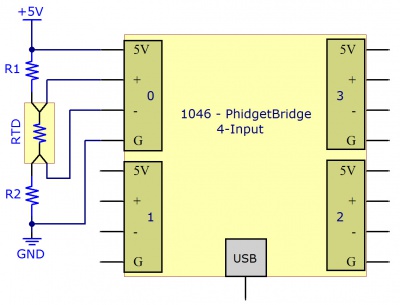 This diagram illustrates how to connect the RTD to the PhidgetBridge with a voltage divider cirtuit.

is the Bridge Value given by the PhidgetBridge (in mV/V) , and

are the resistances of the known resistors.

In order to get the highest accuracy from the RTD, consider the following:

The PhidgetBridge Bridge-full application will allow you to verify that your PhidgetBridge is working, and that your wiring is functional. Please check the 1046 User Guide for instructions on launching the application. The PhidgetBridge has the ability to amplify the measured signal - it was built to measure extremely small signals. Amplification is not necessary with RTDs, so we recommend leaving the gain set to 1 unless you want higher precision at low temperatures at the cost of saturating before it reaches higher temperatures. If amplifier is in danger of saturating (reaching the limit), an Overrange error will be thrown. When using the Bridge-full application, remember to check the Enabled box, to power up the bridge and start measurements.

There are several standards for RTDs. Common RTDs are built from platinum, the most common models being Pt100 and Pt1000. The 100 or 1000 refers to the resistance of the RTD and 0 Celsius. We have calculated formulas for the PT100 and PT1000 standards to convert the Bridge Value in (mv/V) directly into a temperature.

where VB is the BridgeValue given by the PhidgetBridge (in mV/V), and

Using the Resistor Kit with non-standard RTDs and thermistors

Self heating of RTDs

By passing current through the RTD, it will heat up, distorting your temperature measurement. To determine the power dissipated as heat in the RTD use the following formula,

where RRTD is the resistance of your RTD.

The RTD manufacturer will often specify the temperature increase of the RTD as a function of power (watts). This

power was calculated in the previous equation. This temperature increase will depend on if it is attached to a larger object that will sink the heat away, or if there is air movement over the RTD. A simple way to reduce the effects of self-heating is to enable the bridge in software during the measurement period, and disable the bridge until the next measurement.

Using these resistors in a circuit with an RTD or another resistive sensor allows it to be accurately read by wheatstone bridge interfaces. See the User Guide of the Bridge Interface for detail on how to build the circuit.