If this is your first time working with a Phidget, we suggest starting with the Getting Started page for your specific device. This can be found in the user guide for your device. That page will walk you through installing drivers and libraries for your operating system, and will then bring you back here to use VBScript specifically.

VBScript is capable of using the complete Phidget API, including events. We also provide example code in VBScript for the Phidget Encoder, Interface Kit and RFID boards.

VBScript can be developed with various script editors, although the programs themselves only run in Internet Explore (IE).

You can compare VBScript with our other supported languages.

Just need the VBScript documentation, drivers, libraries, and examples? Here they are:

Getting started with VBScript

Visual Basic script is only supported under Windows 2000 / XP / Vista / 7, and then for use only under Internet Explorer.

The examples are quite easy to run under Windows, all you need is the Phidget libraries installed, and Internet Explorer.

When you run Phidget examples, depending on your security settings, Internet Explorer may ask you whether you actually want to run the example or not: 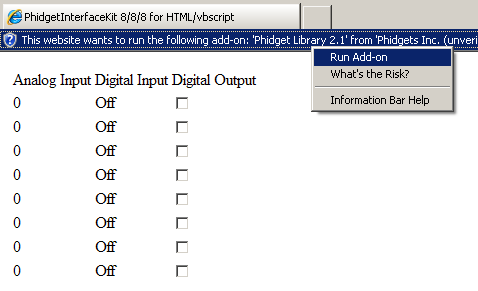 At this point you need to select "Run Add On". This prompt can blend in at the top of the screen, so make sure to look for and approve it once the example is open.

We provide Hello World examples for both Internet Explorer (IE) and for Windows Script Host (WSH). These are simple, high-level examples that work with any Phidget. We also have a few in-depth examples for our Interface Kit, our Encoder, and our RFID boards. The source file will be named the same as the software object for your device. If you are not sure what the software object for your device is, find your Phidget on our webpage, and then check the API documentation for it.

The HelloWorld example simply prints a message when a Phidget is plugged in (attached) or unplugged (detached). For example, if we run it and then plug in an Interface Kit, we see:

To begin, load the HTML editor of your choice and create a new document. Add a table to body of the code for the purpose of displaying simple output.

Before you can use the Phidget, you must include its Class ID on object creation in your code. This will let the browser know which library to try and load for the Phidget definitions. Each type of Phidget has its ClassID listed inside the ClassID_List.txt document from the VBScript examples. For example, we can declare and create a PhidgetInterfaceKit for vbscript with:

Your main reference for writing VBScript code will be our .COM API information, with syntax for all of our functions:

To learn the details behind opening, configuring, using, and closing your Phidget, try the General Phidget Programming page. That page also describes using the Phidget in an event-driven manner and in a traditional manner, both of which are available in VBScript.

Specific calls in VBScript will differ in syntax from those on the General Phidget Programming page, but the concepts stay the same.

It may help to have the General Phidget Programming page and this section open at the same time, because they parallel each other and you can refer to the VBScript syntax.  However, many additional concepts are covered on the General Phidget Programming page on a high level, such as using multiple Phidgets, handling errors, and different styles of programming.

The different parameters and open calls can be used to open the first Phidget of a type it can find, open based on a serial number, or even open across the network. The .COM API manual lists all of the available modes that open provides.

One important thing to remember is that when working with Phidgets, a local connection will reserve the device until closed. This prevents any other instances from retrieving data from the Phidget, including other programs. The one connection per device limit does not apply when exclusively using the Phidget WebService.

To use the Phidget, it must be plugged in (attached). Because we do not know whether it is when our code starts, this means that simply calling open does not guarantee you can use the Phidget immediately. We can account for a connection by using event driven programming and tracking the AttachEvents and DetachEvents, or by calling WaitForAttachment. WaitForAttachment will block indefinitely until a connection is made to the Phidget, or an optional timeout is exceeded:

We recommend the use of event driven programming when working with Phidgets. In VBScript, we can hook an event handler with the following code:

With this method, the code inside onSensorChange will get executed every time the PhidgetInterfaceKit reports a change on one of its analog inputs.

Some events such as Attach and Detach belong to the base Phidget object and thus are common to all types of Phidgets. Other events, such as this one to read a sensor change, are specific to the type of Phidget (for example, a Temperature Sensor would have a temperature change event). Please refer to the API manual for a full list of events and their usage.

Some values can be directly read and set on the Phidget, and inside polling loops used as an alternative to event driven programming. For example, simply use the instance properties such as phid.SensorChangeTrigger(Index) for Phidget Interface Kits:

If the web page will close via a button, say, and you would like to release use of the Phidget, you can close it via the Close function:

Then when the button that this function is hooked into is clicked, the Phidget will be closed in software (though not reset or turned off).