Difference between revisions of "Language - Delphi"

Delphi is used by such a small group of our users that we have decided to drop active support for Delphi. We will continue support until June 16th 2016. The libraries will still exist and be available for download and use though no further development will occur and official support will end.

If this is your first time working with a Phidget, we suggest starting with the Getting Started page for your specific device. This can be found in the user guide for your device. That page will walk you through installing drivers and libraries for your operating system, and will then bring you back here to use Delphi specifically.

Delphi can be developed with Windows.

You can compare Delphi with our other supported languages.

Just need the Delphi documentation, drivers, libraries, and examples? Here they are:

Getting Started with Delphi

Delphi is a .COM-based language. Currently Windows is the only supported operating system for Delphi:

The Phidget examples were written using Borland Delphi 2005 and 7, although they also work with other versions of Delphi as described on this Delphi Language page. We include the method to import ActiveX objects onto these platforms, but our current in-depth support for using our examples and writing your own code is only for Embarcadero Delphi XE2.

The ActiveX objects installed with the Phidget libraries are not automatically imported into Delphi, so to begin you will need to manually import them.

In slightly newer versions of Delphi:

Once installed, all future projects will be able to use the Phidget ActiveX objects.

Embarcadero Delphi is the more recent platform for developing Delphi on. To use it, we follow the same setup procedure as Borland, which is to first import the Phidget library as an ActiveX object. We then offer in-depth instructions on how to use the Phidget examples, both as described below.

The ActiveX objects installed with the Phidget libraries are not automatically imported into Delphi, so to begin you will need to manually import them. In Embarcadero XE2, do the following: 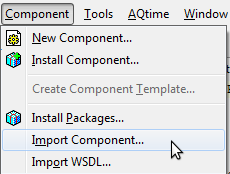 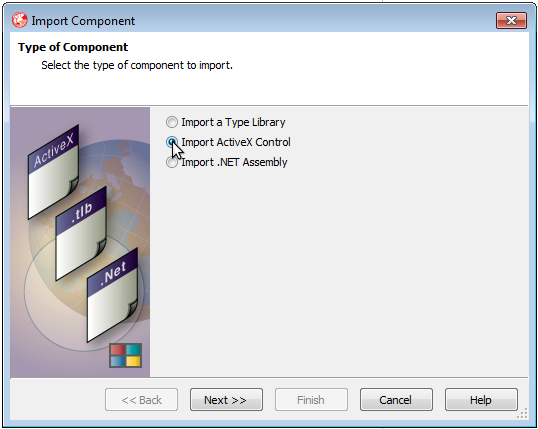 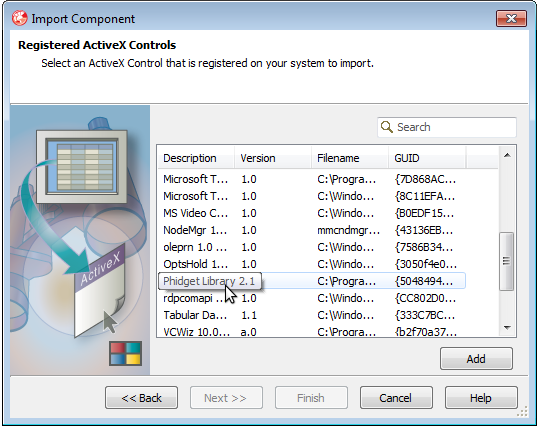 4. Choose Install into a new package and click next: 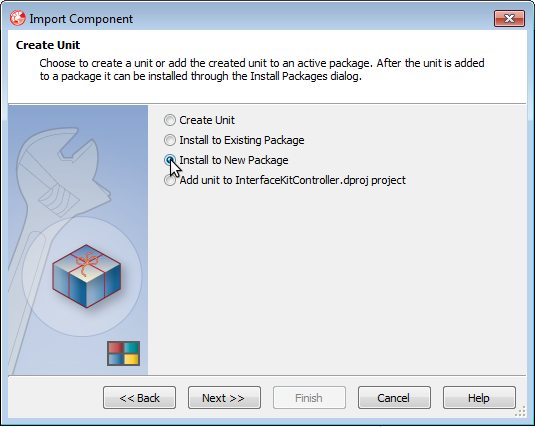 5. Give the package a name and description such as “Phidgets”, and then click Finish.

6. To finish, the objects need to be re-linked. When prompted to do this, click Yes:

At this point, opening a new project will have the use of the Phidget library. If you already had a project open, you will need to close and re-open it for the linking to Phidgets to occur.

First download the Delphi examples and unpack them. Each project has its own folder. You can open an existing project and navigate to the project file itself to open it:

Then, the project and all of its files will appear in your project navigator on the right. Plug in your Phidget to your computer, and make sure no other programs are accessing the Phidget. Right-click on the project root and select "Run". For example, for the Interface Kit Phidget, your project will probably look something like this: 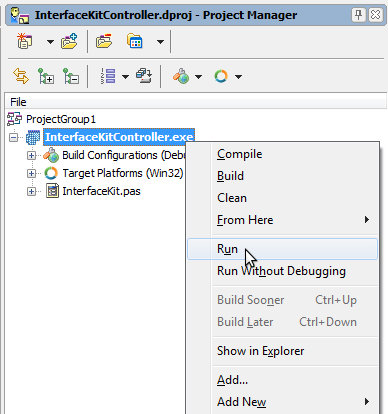 The GUI form of the example will open, and you can test your device.

In Embarcadero, the lower right panel displays the available ActiveX objects for coding. You can create a new project and then simply drag the ActiveX object that matches your Phidget device into your project.

We have a teaching section below which includes code snippets to augment the examples and help you compose your project.

Your main reference for writing Delphi code will be our .COM API information, with syntax for all of our functions:

To learn the details behind opening, configuring, using, and closing your Phidget, try the General Phidget Programming page. That page also describes using the Phidget in an event-driven manner and in a traditional manner, both of which are available in Delphi.

Specific calls in Delphi will differ in syntax from those on the General Phidget Programming page, but the concepts stay the same.

It may help to have the General Phidget Programming page and this section open at the same time, because they parallel each other and you can refer to the Delphi syntax.  However, many additional concepts are covered on the General Phidget Programming page on a high level, such as using multiple Phidgets, handling errors, and different styles of programming.

Before you can use the Phidget, you must declare and initialize its ActiveX object. The simplest method is to place the control from the ActiveX component tab on to your form. For this tutorial, we create a Phidget Interface Kit control (PhidgetInterfaceKit1) and then add a text edit field to the form for the purpose of capturing simple output. The object name for any type of Phidget is listed in the API manual. Every type of Phidget also inherits functionality from the Phidget base class.

The parameters (here just a -1) can also be used to open the first Phidget of a type it can find, open based on its serial number, or even open across the network. The API manual lists all of the available modes that open provides.

One important thing to remember is that when working with Phidgets, a local connection will reserve the device until closed. This prevents any other instances from retrieving data from the Phidget, including other programs. The one connection per device limit does not apply when exclusively using the Phidget WebService. To open multiple Phidgets, they each need their own ActiveX object, and you can distinguish between them by serial number.

Calling open does not guarantee you can use the Phidget immediately. To use the Phidget, it must be plugged in (attached). We can handle this by using event driven programming and tracking the AttachEvents and DetachEvents, or we can handle this by calling WaitForAttachment. You can put the wait function right after your open function. So we can modify our opening block to read:

This function works for any Phidget. WaitForAttachment will block indefinitely until a connection is made to the Phidget, or an optional timeout is exceeded.

We recommend the use of event driven programming when working with Phidgets. This allows the program to execute other tasks until the Phidget fires a new event.

In Delphi, when the event library was installed as described in the Use Our Examples section, it added Phidget ActiveX components for each type of Phidget. These ActiveX components will show up in the toolbox under the ActiveX tab, usually in the lower right. The ActiveX object for your Phidget can be added to the form and then hooked to the event handlers you wish to use like any other control.

For example, for a Phidget21COMIPhidgetInterfaceKitEvents control, the event handler looks like the following:

With this method, the code inside PhidgetInterfaceKit1SensorChange will get executed every time the PhidgetInterfaceKit reports a change on one of its analog inputs. Some events such as Attach and Detach belong to the base Phidget object and thus are common to all types of Phidgets. Other events, like this sensor change one, are specific to the type of Phidget. Please refer to the COM API manual for a full list of events and their general usage.

Some values can be directly read and set on the Phidget. These functions can be used inside a polling loop as an alternative to event driven programming. Simply use the CallString such as SensorValue[Index] or OutputState[Index] for PhidgetInterfaceKits:

Remember that the Open call reserves the Phidget for sole use by your program. Close removes this lock. You can call Close any time outside of the Phidget's own event handlers to end the connection.

Often it’s a good idea to enable logging during development for debugging purposes. This log, depending on the level set, will record certain events and errors from Phidgets. In Delphi, this is accomplished by calling EnableLogging(logLevel, filename) on the Phidget object.

Similarly, you can call DisableLogging() at the end of your program to shut it off. Should you need to contact Phidgets for support, including this log is very helpful for revealing the cause of the problem. Please see the Programming Manual for a general discussion on Phidget logging and the levels provided.

In Delphi XE2, you cannot use the Phidget Manager as an object directly. If you need to open multiple Phidgets of the same device type, use the serial number to distinguish between them.

Embarcadero Delphi does not work under Windows running as a guest on Oracle's VirtualBox. Adding an ActiveX object on such a system will crash the system and appear to destroy it, although a hard power cycle will recover the system. VMWare does not suffer from this problem, and of course native Windows 7 works fine.