Digital Inputs can be used to convey the state of various devices such as push buttons, limit switches, relays, or logic level outputs. They have two states: Low (or TRUE), and High (or FALSE). Any signal that is expected to interact with more than just these 2 states is inappropriate for this type of input.

Digital inputs are one of the easiest components to work with, since all that is required is a simple check to see which state they are in when an event triggers.

Note: The digital inputs on the 1012 - PhidgetInterfaceKit 0/16/16 are active high rather than active low, so the instructions on this page do not apply. For information on the inputs on the 1012 please refer to the technical section of it's User Guide.

There is built-in filtering on the digital input, to eliminate false triggering from electrical noise. The digital input is first RC filtered by a 15K/100nF node, which will reject noise of higher frequency than 1kHz. This filter generally eliminates the need to shield the digital input from inductive and capacitive coupling likely to occur in wiring harnesses. You can further reduce noise by externally filtering the input signal, but you will lose sensitivity in the process.

The state of the digital inputs are reported back to the PC periodically. During this sampling period, if a digital input was true for greater than 4.0ms, the digital input is guaranteed to be reported as true in software. This makes the digital input much more sensitive to reporting TRUE state, and makes it useful to watch for short events. Any Digital Input True events of less than 1.5ms are never reported. 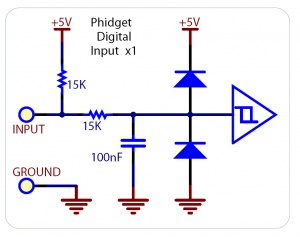 Schematic for a Phidgets digital input.

The digital inputs have a built in 15K pull-up resistor. By connecting external circuitry, and forcing the input to Ground, the Digital Input in software will read as TRUE. The default state is FALSE - when you have nothing connected, or your circuitry (switch, etc) is not pulling the input to ground.

Here are some circuit diagrams that illustrate how to connect various devices to the digital inputs on your Phidget.

Wiring a switch to a Digital Input

Schematic for connecting a switch to a digital input.

Closing the switch causes the digital input to report TRUE.

Monitoring the Position of a Relay 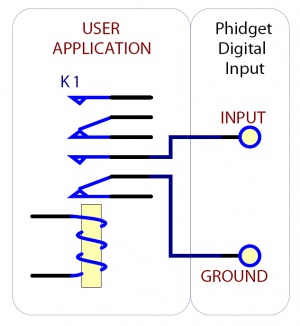 Schematic for connecting to a relay.

Detecting an External Voltage with an N-Channel MOSFET 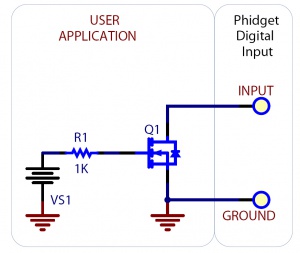 Schematic for detecting voltage with a NMOS transistor.

Isolating a Digital Input with an Optocoupler 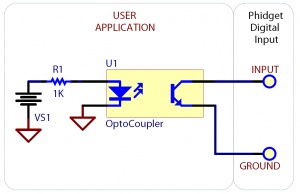 Schematic showing isolation of a digital input with an optocoupler.

When driving current through the LED, the Digital Input will report TRUE. The amount of current required will depend on the optocoupler used. Design to sink at least 270uA to cause the digital input to report TRUE, and less than 67uA to report FALSE.

Detecting an External Voltage with an NPN Transistor 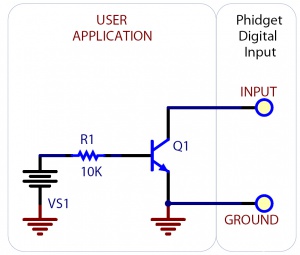 Schematic for detecting voltage with an NPN transistor.

This circuit can be used to measure if a battery is connected, or if 12V (for example) is on a wire. By designing to have Collector-Emitter current > 270uA, the digital input will report TRUE. 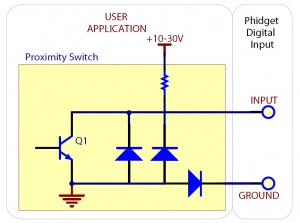 Schematic for connecting to a proximity switch.

Using an FSR or Variable Resistor as a Switch 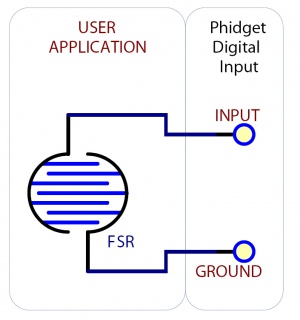 Schematic for using an FSR as a switch.