Web Page on the SBC

The project described here creates a website hosted on the Phidget Single Board Computer (SBC). The website can both serve static pages, as well as pages that can send simple requests back and forth to the Phidgets attached to the SBC.

With this kind of system, you only need to develop cross-browser compatible web pages, as the code to control the Phidget runs on the SBC.

As with any of our described projects, Phidgets takes care of the electrical component design. This is a middle-ground solution to controlling Phidgets over a network using the SBC.

The SBC already runs a web server, with the pages to be served located in the /var/www directory. We take advantage of this by creating a web page using a cgi-bin Python script. Since the script is in Python, it can also control any attached Phidgets, including the Interface Kit on the SBC.

The flow of the system we will build looks like this:

For this, you will need:

First, we build a static web page with no Phidget involvement. If you just want to host a few pages on the SBC, that part of the example will help greatly.

Then we write a separate and unrelated Python script, save it in the SBC's cgi-bin directory, and run it over the network.

To create a web page hosted on the SBC, you simply have to create one and save it in the /var/www/ directory.

When you log into the SBC using SSH, you can move into that directory and start editing a simple HTML file by:

Then, type in a simple web page structure, such as this:

Finally, go to that address in a browser on the same local network as the SBC, using the address http://phidgetsbc.local/helloworld.html (replace the link local address of the SBC and the filename if you've changed them). Which will give you something like this:

Script-generated web pages go in a special folder called cgi-bin/ within the /var/www/ directory. In addition, they end with an extension that tells the SBC how to run them. Python cgi scripts end with .py.

To enter the cgi-bin directory, and then create and edit (using nano) a file called led_state.py, you can type the following into an SSH terminal to the SBC:

Within the nano editor, you can enter this code:

Save it, and your SBC is now ready to control the LED over the web!

Head over to the web address of your Python cgi script: http://phidgetsbc.local/cgi-bin/led_state.py - replacing the local link address and file name if you've changed them. You will arrive (depending on the initial LED state) at one of a few different pages.

There are essentially four different web pages that this script produces. There are two where we do not include any request in the http address. One where the LED is already on:

And one where the LED is already off:

Then there are two pages where we include a request for a new LED state in the http address. You can do this by tacking a ?setLED=0 or ?setLED=1 on to the end of the address.

Requesting that the LED turn on (?setLED=1) gives:

And requesting that the LED turn off (?setLED=0) gives:

The Toggle LED link is just generated in the Python script to be a request-type page with the request toggling the LED.

And you're done! Give the web page address to everyone on your local network, so they can have fun turning your LED on and off at random times.

These requests over the web are fast, but theoretically more than one can happen at one time. In that case, the Phidget Interface Kit will already be attached and bound to another program, so you will get an error. With the web script in this application guide, the error will probably look something like this: 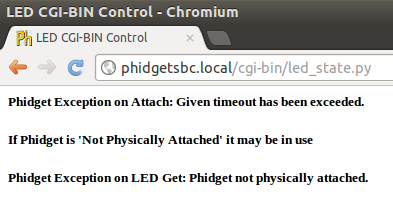