The Phidget Manager is a software object that lets you access all of the Phidgets attached to your system. If you want to 'search for all attached Phidgets', in your code the Manager is the tool you would use.

You are probably already used to Phidget software objects, where a single set of functions for a board - say, an Interface Kit:

....Is actually embedded into an object that also uses the Phidget Common library to open, close, and delete: 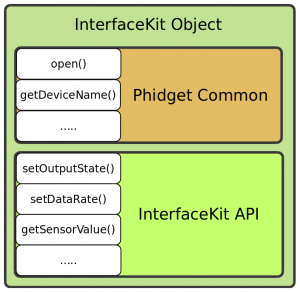 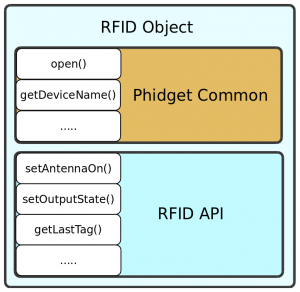 This is not true for the Manager. The Manager is an object like other Phidget objects, but with a distinct difference - all of its functions are Manager functions: 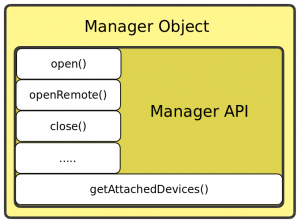 For some languages, such as C, this means you do not have to change between a Phidget type and your specific device type when opening, closing, etc. All manager functions take a Phidget Manager type object.

You can find the API for the Phidget Manager in the API on the page for your language.

Perhaps the most useful function of the Manager is the getAttachedDevices() function. This is the tool that returns all attached Phidget devices, as its name implies. The returned devices are returned as an array: 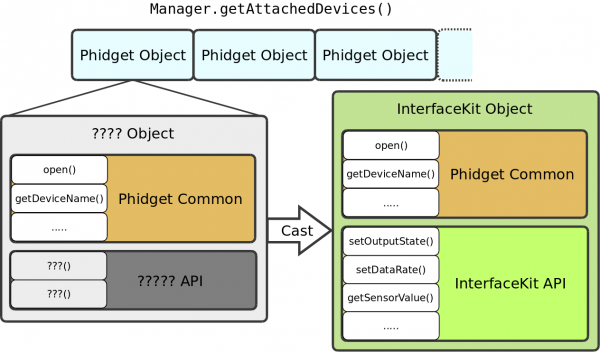 This way, you can use the whole API for your device.

When using the Manager expressly for the getAttachedDevices() function, you must allow time for the PhidgetManager to detect for any Phidgets attached to the system. This can be achieved by allowing the program to wait a short while before attempting to get the attached devices. Another method would be to get the attached devices once the PhidgetManager's attach event triggers.

As with any other Phidget software object, the Phidget Manager must be opened, then attached within your code. These and other concepts are discussed on the General Phidget Programming page.

Finally, all of our HelloWorld programming examples - available for most of the languages we support - use the Manager to work with any Phidget.