A load cell is a force sensing module - a carefully designed metal structure, with small elements called strain gauges mounted in precise locations on the structure. Load cells are designed to measure a specific force, and ignore other forces being applied. The electrical signal output by the load cell is very small and requires specialized amplification. Fortunately, the 1046 - PhidgetBridge 4-Input will perform all the amplification and measurement of the electrical output.Load cells are designed to measure force in one direction.

They will often measure force in other directions, but the sensor sensitivity will be different, since parts of the load cell operating under compression are now in tension, and vice versa. 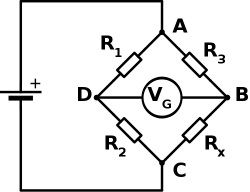 Strain-gauge load cells convert the load acting on them into electrical signals. The measuring is done with very small resistor patterns called strain gauges - effectively small, flexible circuit boards. The gauges are bonded onto a beam or structural member that deforms when weight is applied, in turn deforming the strain-gauge. As the strain gauge is deformed, it’s electrical resistance changes in proportion to the load.

The changes to the circuit caused by force is much smaller than the changes caused by variation in temperature. Higher quality load cells cancel out the effects of temperature using two techniques. By matching the expansion rate of the strain gauge to the expansion rate of the metal it’s mounted on, undue strain on the gauges can be avoided as the load cell warms up and cools down. The most important method of temperature compensation involves using multiple strain gauges, which all respond to the change in temperature with the same change in resistance. Some load cell designs use gauges which are never subjected to any force, but only serve to counterbalance the temperature effects on the gauges that measuring force. Most designs use 4 strain gauges, some in compression, some under tension, which maximizes the sensitivity of the load cell, and automatically cancels the effect of temperature.

Other types of load cell exist which have half bridges (2 strain gauges) or quarter bridges but they require additional hardware to operate since you must complete the bridge to get the most accurate readings.

What is a Wheatstone bridge?

A Wheatstone bridge is an electrical circuit used to measure and unknown resistance by balancing 2 legs of a bridge circuit. One leg of which contains the unknown value. Wheatstone bridges are made up of 4 resistors or loads in a square with a voltage meter bridging 2 corners of the square and power/ground connected to the other corners. In the case of a load cell, these resistors are strain gauges. 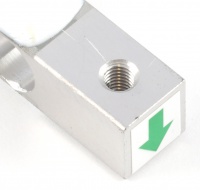 A single-point load cell. Applying force to one end creates stress in the bar, causing the strain gauge encased in the white plastic to flex. 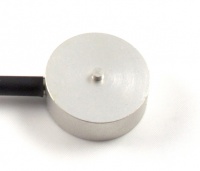 A button load cell. Applying force to the bump in the middle of the cell causes a change in the output.

This Button Load Cell is used in applications that require a thin form factor. The bottom of the load cell is bolted, and force applied to the button on the top. By loading only the button, which is slightly rounded, the load cell is less sensitive to errors resulting from the load not pushing down exactly straight on the load cell. 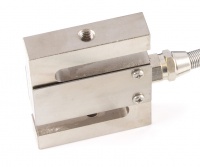 This S-Type load cell can be operated in compression or tension, as illustrated below.

You can use this simple formula to convert the measured mv/V output from the load cell to the measured force:

Where K is gain value that will change depending on what unit of force or weight you want to measure. Since the offset varies between individual load cells, it’s necessary to measure it for each sensor. Record the output of the load cell at rest on a flat surface with no force on it. The mv/V output measured by the PhidgetBridge is the offset.

Once you’ve found the offset, measure something with a known weight and solve the equation for K. You can also calibrate the load cell at multiple known weights and use these points to model a linear function.

For arrays of load cells there are two different configurations you can use:

When comparing load cells, there are a number of specifications to consider. This section lists and defines the properties commonly listed on load cells.

The maximum load the load cell is designed to measure within its specifications.

The change in sensor output occurring over 30 minutes, while under load at or near capacity and with all environmental conditions and other variables remaining constant.

Used to qualify error - FULL SCALE is the change in output when the sensor is fully loaded. If a particular error (for example, Non-Linearity) is expressed as 0.1% F.S., and the output is 1.0mV/V, the maximum non-linearity that will be seen over the operating range of the sensor will be 0.001 mV/V. An important distinction is that this error doesn’t have to only occur at the maximum load. If you are operating the sensor at a maximum of 10% of capacity, for this example, the non-linearity would still be 0.001mV/V, or 1% of the operating range that you are actually using.

If a force equal to 50% of capacity is applied to a load cell which has been at no load, a given output will be measured. The same load cell is at full capacity, and some of the force is removed, resulting in the load cell operating at 50% capacity. The difference in output between the two test scenarios is called hysteresis.

Specifies the voltage that can be applied to the power/ground terminals on the load cell. In practice, if you are using the load cell with the PhidgetBridge, you don’t have to worry about this spec.

Determines the power that will be consumed by the load cell. The lower this number is, the more current will be required, and the more heating will occur when the load cell is powered. In very noisy environments, a lower input impedance will reduce the effect of Electromagnetic interference on long wires between the load cell and PhidgetBridge.

The maximum load which can be applied without producing a structural failure.

Ideally, the output of the sensor will be perfectly linear, and a simple 2-point calibration will exactly describe the behaviour of the sensor at other loads. In practice, the sensor is not perfect, and Non-linearity describes the maximum deviation from the linear curve. Theoretically, if a more complex calibration is used, some of the non-linearity can be calibrated out, but this will require a very high accuracy calibration with multiple points.

The maximum difference the sensor will report when exactly the same weight is applied, at the same temperature, over multiple test runs.

The extremes of ambient temperature within which the load cell will operate without permanent adverse change to any of its performance characteristics.

Roughly corresponds to the input impedance. If the Output Impedance is very high, measuring the bridge will distort the results. The PhidgetBridge carefully buffers the signals coming from the load cell, so in practice this is not a concern.

Is the difference in the output of the sensor between when it is fully loaded to its rated capacity, and when it’s unloaded. Effectively, it’s how sensitive the sensor is, and corresponds to the gain calculated when calibrating the sensor. More expensive sensors have an exact rated output based on an individual calibration done at the factory.

This is affected by the chosen gain as well. In general, noise means you won't be able to achieve this reliably but the point is that resolution is not a useful spec for a load cell to have.

The maximum axial load which can be applied without producing a permanent shift in performance characteristics beyond those specified.

The range of temperature over which the load cell is compensated to maintain output and zero balance within specified limits.

Span is also called rated output. This value is the change in output due to a 1-degree Celsius change in ambient temperature.

The change in zero balance due to a 1-degree Celsius change in ambient temperature.

Zero Balance defines the maximum difference between the +/- output wires when no load is applied. Realistically, each sensor will be individually calibrated, at least for the output when no load is applied. Zero Balance is more of a concern if the load cell is being interfaced to an amplification circuit - the PhidgetBridge can easily handle enormous differences between +/-. If the difference is very large, the PhidgetBridge will not be able to use the higher Gain settings.