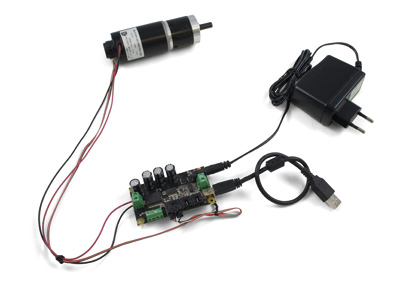 A DC motor is a motor that takes DC power in and converts it to rotational motion. Since DC motors can ordinarily only be told how fast to go (on a scale from -100% to 100% duty cycle) you need to program a control system. In order to make a control system, you'll need a motor that has a feedback device such as an encoder.

This application guide is designed to explain the basics of PID control and how to implement a basic control loop using Phidgets. Once implemented, the control loop will allow the DC motor to move to a precise position and remain there, even if an external force tries to move it.

The goal of a control loop is to use data from the feedback device (in this case, the encoder) to iteratively adjust the output until it has reached the target value.

For example, consider this simple control loop (This code would be used in the encoder change event handler): 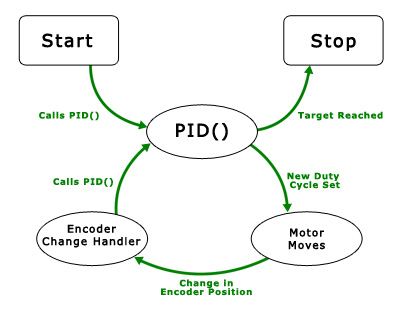 This diagram illustrates the flow of the simple control loop being implemented. The function PID() is called, which sets a new duty cycle, which causes the motor to move. Eight milliseconds later, the encoder that keeps track of how far the rotor has moved causes an encoder change event, which in turn calls PID() again. The cycle continues until the target position is reached.

Whenever the encoder value (ActualPosition) changes, the event handler triggers and updates the Duty Cycle of the motor. Eventually, this will result in the motor reaching its target. The following table further illustrates how this works:

The type of control we've just implemented here is called Proportional control, because the output is directly proportional to the error. We can multiply (TargetPosition - ActualPosition) by a gain value if we want to control how the control loop behaves when it gets close to the target. A lower value (i.e. less than 1) will result in a more gradual reduction in speed as the motor reaches its target position, while a larger value will result in a sharper, quicker response. We'll call this value the proportional gain, or Kp for short. If the proportional gain is set too high, the motor will overshoot the target position and oscillate back and forth around the target.

While we've gained basic control of the motor position, there are still some problems with purely proportional control. You may find that the motor never quite reaches the target position, especially with a low proportional gain. Also, if the load on the motor changes while it's moving, it won't be able to react to the difference. To solve these problems, we need an integral term.

The purpose of the integral term in a control loop is to look back at all of the past error and accumulate it into an offset that the control loop can use. Combined with our proportional control loop, it will be able to react to changes in load and land closer to the target position if we choose our gain values properly.

Where dt is the change in time between iterations of the control loop. For this example, dt is set to 0.008 seconds, which is the update rate of the encoder event. The integral is only accumulated when the duty cycle isn't saturated at 100% or -100%. This prevents the control loop from needlessly accumulating the integral when it's already running at maximum velocity. Now we have two control gains: Kp and Ki. Kp still functions as it did in the proportional example, and Ki controls how influential the integral term is. Increasing the integral gain will cause the control loop to reach the target faster, and ensure that you hit the exact target rather than settling to a value close to the target. Just like the proportional gain, increasing the integral gain too much can cause instability.

After tweaking the control gains, you may find that PI control is sufficient for your application. If you're having trouble finding control gains that provide the results you're looking for, you can implement full PID control by adding the derivative term.

Where errorlast is the error value from a set number of samples ago. In an application such as this, an error value from around 64 samples ago (0.5 seconds) should suffice. Just as before, we can now use Kd to modify the weight of this new derivative term. Increasing Kd should smooth things out and increase stability, but you'll find that it should be kept small in comparison to the other control gains or it will cause the control to oscillate when it's near the target. 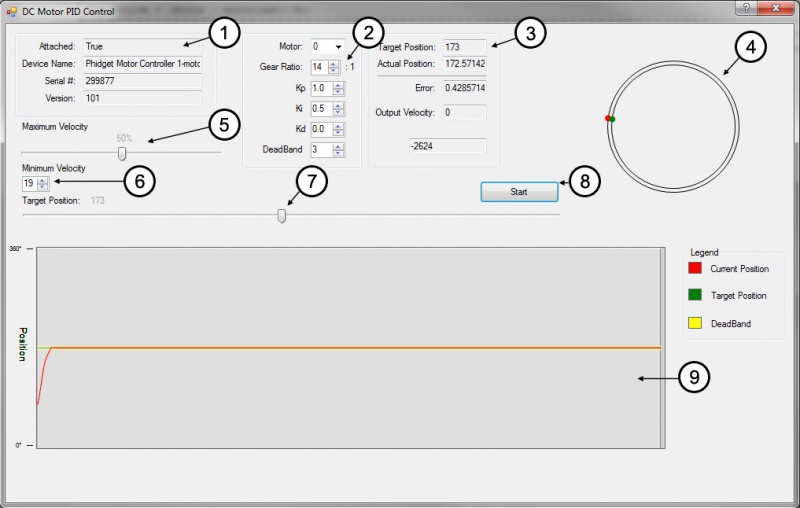 The PID control algorithm in this sample program operates by setting up a change handler for the encoder, which then calls an external function that computes the PID control loop output as briefly described in the previous section. By changing the output, the motor's duty cycle is set and the function will be called again the next time the encoder change handler triggers (in 0.008 seconds, because the sampling period of an encoder input is 8ms). This loop will continue until the output of the control loop is zero and the motor has reached its target.

It's always a good idea to keep your event handlers as small and optimized as possible to avoid missing events. In this sample program, all of the complexity of the PID algorithm is tucked away in the function "PID( )".

In the downloadable example, this function also updates the graph and all of the text boxes that track the variables. These lines were removed from the excerpt below for increased readability.