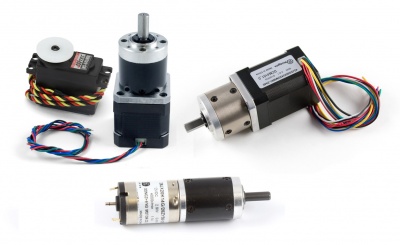 There are 4 categories of electric motors that are used in practical applications and are easily available for purchase. They are:

Each of these classes has several variants and each have their advantages and disadvantages.

There are many different options when considering what type of motor to use. This table provides a summary of the differences:

1- The positional precision of a DC motor with encoder depends on the encoders CPR (counts per revolution). For example, a 360 CPR encoder would provide 1° precision.

2- Gearboxes introduce inaccuracy in the form of "slop" (gap between mated gear teeth). For maximum precision, stick with gearless steppers with 0.9° step angle.

3- The positional precision of a BLDC motor varies depending on the hall effect sensor in the motor and how the controller measures the data from it.

While most motors have fully continuous rotation, there is one type of motor that has limited rotation: servo motors. Most servos have 180° of travel, but you can find some multi-rotation servos designed to be part of a winch mechanism. The limited rotation angle of servo motors is a tradeoff for having built-in position control using a potentiometer.

If you want to be able to specify a precise position for your motor to rotate to and stop, you'll need some form of position control. There are two main types of control.

Systems without closed-loop position control can be upgraded by adding an encoder to the motor. Combined with a device that can read it, the encoder will provide feedback that will enable closed-loop control.

In the same way that encoders can be used to upgrade the position control of a system, they can also provide closed-loop velocity control.

There are a number of factors that impact the precision of a motor's position control, depending on the type of motor and what kind of feedback mechanism it uses.

Stepper motors are accurate to whatever the motor step angle is. The typical step angle is 1.8°, in which case the motor's positioning would always be a multiple of 1.8°, resulting in 200 unique positions across a full rotation.

If you're using an encoder, the precision will be limited by the encoder's CPR. For example, a CPR of 360 will result in 1° resolution.

If your motor has a gearbox, it will introduce some amount of error in positioning due to empty space between mated gear teeth. This is called "backlash" or "slop". Typical gearboxes can have anywhere from 1 to 3 degrees of slop, which impacts your positioning precision directly.

Due to differences in how motors are built and controlled, the prices between types of motor vary drastically.

Servo motors are often the most economical option for low-torque applications. While the price for a single motor is comparable to other options, servo controller boards are often set up to control as many as 16 servos at once.

DC motors are the simplest type of motor, and are available in a wide range of sizes. DC controllers are usually fairly simple, so the controller cost isn't as high as steppers or BLDC.

Stepper motors and BLDC motors are more expensive, because the motors as more complicated to control.

Gearboxes, a common feature of electric motors, use the mechanical advantage of gears to reduce the speed of the motor and increase the torque. The speed and accuracy are affected directly by the gear ratio, as seen in these equations:

For example, a motor with a speed of 500 rpm and a gearbox with a 10:1 gear ratio would result in and output speed of 50 rpm.

Although the reduction ratio plays a large part in determining the Gearbox Output Torque, there is also an inefficiency that is introduced through the use of a gearbox. Some of the torque of the motor is converted into heat and lost due to friction between the gears. Gearbox efficiency depends on the physical characteristics of the gears, the number of gear stages, and gearing system used. You can calculate the Gearbox Output Torque with the following equation:

Keep in mind that while adding a gearbox does increase the torque, the gearbox itself is only rated to withstand a certain amount of torque before it risks becoming damaged or breaking. When selecting a motor, you should always consider the actual operating torque to be the minimum of the output torque and the gearbox strength. For example, a motor that can normally output 5 kg·cm of torque with a 10:1, 90% efficient gearbox whose gears are rated for 40 kg·cm would theoretically be able to output 45 kg·cm of torque, but in practice the 40 kg·cm limit of the gearbox should be considered the maximum torque. 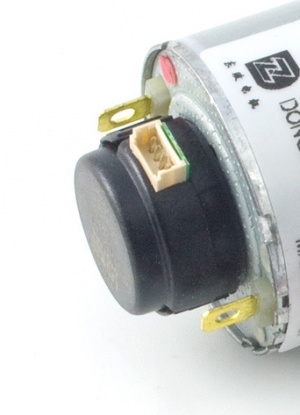 A small optical encoder mounted on the rear shaft of a DC motor.

An encoder is a device installed on the shaft of a motor that can be used to keep track of the position of the motor or calculate the speed of the motor. Encoders are often used with a DC motor and a PID control system in order to achieve position/velocity control of a motor that would otherwise only have simple on/off control. Some motors have the shaft exposed on both sides of the motor, so an encoder can be attached on one end without getting in the way of what the motor is driving.

Encoders are rarely used with BLDC motors or servo motors, since they both already have some form of closed-loop position feedback built-in. Encoders are sometimes used with stepper motors, because position control in a stepper motor is open-loop (the controller has no way of knowing whether the stepper actually made it to the desired position, it only knows how far it has told the stepper to go). Excessive vibration, external forces, or sudden high-torque loads can cause steps to be missed, so an encoder would close the control loop and provide actual feedback in this case.

It can be difficult to estimate how much torque will be required for a certain application before the project is built, but there are plenty of guidelines and rules-of-thumb online that can give you a good idea.

In the case of a typical wheeled vehicle, we recommend you take the mass of the vehicle and multiply by the radius of the wheels, then divide by four.

For example, a 20kg vehicle with wheels of radius 6cm would call for a total goal of 30 kg·cm contributed from all of the motors. This should be more than enough torque to move around on smooth terrain and gentle inclines. If you need to be able to handle rough terrain or sharp inclines, you may want to only divide by a factor of 3 or even 2. In general, it's a good idea to get a more powerful motor than you think you'll need, just to account for unforeseen factors.