LEDs that Phidgets sells are all operable via the digital outputs on any of our interface kits. However Phidgets also sells a specific LED controller since it is often desirable to control more LEDs than even the 0/16/16 can operate. It offers some unique features such as brightness control. 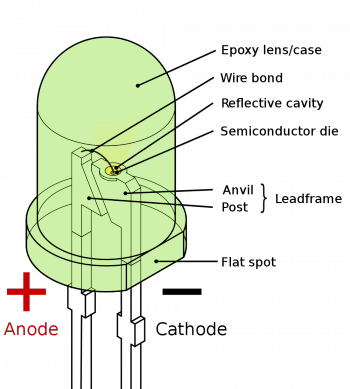 The materials used within LEDs that cause them to emit different colors of light affect a property called its forward voltage. The forward voltage is the voltage at which current in the forward direction will flow through the device and allow the LED to convert electrical energy into light. If the voltage applied to the LED is below the forward voltage of the LED, very little current (or none) may flow, and therefore very little light will be emitted. Most standard LEDs with colors such as red, amber, orange, yellow, and green have forward voltages below 2.75 Volts, and can be used with a digital output by simply soldering them to a connector-wire and inserting the wire into the output port. The forward voltage in the PhidgetLED will default to 2.75V, and the maximum current defaults to 20mA.

Make sure to choose the minimum supply voltage setting to drive the LED that requires the most voltage during operation. Any extra voltage not required by the LED will be converted to heat by the 1031. For example, a Blue LED being driven at 20mA, 3.9V Supply, that requires 3.7 volts will cause (3.9V-3.7V + 0.4V) * 0.02A = 12 milliwatts of heat to be produced on the 1031. If this example instead uses a high power, 1.5V infrared LED at 80mA, this will create (3.9V-1.5V+0.4V)*0.08 Amps = 224 milliwatts of heat. See the Heat Dissipation and Thermal Protection section later on in this manual for more information about this issue.

LED controllers are typically just a set of special digital outputs. This means they aren't limited to just controlling LEDs. They can be used to control relays, solenoids and even very small motors. The PhidgetLED can also be used to drive opto-isolators and MOSFET SSRs. A diode integrated into the 1031 on each cathode will clamp inductive surges to the anode supply voltage.

Projects that require a high supply voltage, or have a lot of heat being produced from over voltage settings, will have over-temperature problems. This can be mitigated somewhat by understanding how channels are grouped and how the heat is distributed around the controller. On the 1031 channels are split into four groups: (0-7,24-31), (8-23), (32-39, 56-63) and (40-55); each controlled by their own individual IC. Evenly distributing the LEDs that may produce a lot of heat across these groups will balance the load on the ICs and reduce the risk of thermal overload. When thermal overload occurs, the integrated circuit (IC) controlling the involved LEDs will disable the output of all the channels it controls. For example, if an over-temperature occurs due to channel 12, all of the channels 8 through 23 will be disabled by the IC until the temperature back within the operating range. Thermal protection is activated when the die of the IC reaches approximately 160 degrees Celsius. Once the over-temperature fault has been corrected (ie, the IC has cooled down), the output channels will be re-enabled with the same settings as before the thermal shutdown. An error message will be produced during an over-temperature.

Products that fall under this category