Difference between revisions of "Language - Visual Basic for Applications"

If this is your first time working with a Phidget, we suggest starting with the Getting Started page for your specific device. This can be found in the user guide for your device. That page will walk you through installing drivers and libraries for your operating system, and will then bring you back here to use Visual Basic for Applications specifically.

Visual Basic for Applications can be developed with Microsoft Office on Windows.

You can compare Visual Basic for Applications with our other supported languages.

Just need the Visual Basic for Applications documentation, drivers, libraries, and examples? Here they are:

Note: Example code is programmed to run in Microsoft Excel.

Getting Started with Visual Basic for Applications (VBA)

For a description of the Phidget library files, please see the main Windows page.

The Phidget examples were written using Microsoft Excel 2000 and this tutorial assumes its use. Other environments such as Microsoft Office should work provided they support VBA, and each would be set up in a similar manner.

First, open the command prompt in administrator mode and type the following command:

If you installed the Phidgets libraries in a different location, you'll have to modify the command.

Then, download and unpack the VBA Examples. Here you will find an example called HelloWorld which is a simple, high-level example which will work with any Phidget device. You will also find specific, in-depth examples for some of our other devices. The source file will be named the same as the software object for your device. If you are not sure what the software object for your device is, find your Phidget on our webpage, and then check the API documentation for it.

The easiest example to start with is the HelloWorld example. Find it in the unpacked examples folder: 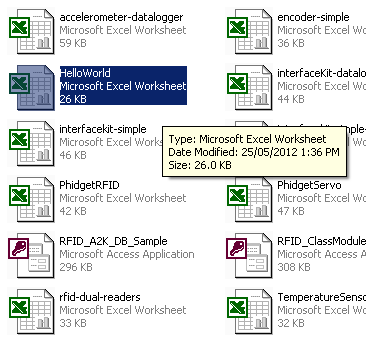 And then double click on it to open it in Excel. It contains Macros, so you may get a message that you can't run the program without changing your security settings. The settings can be found in Office XP under Tools → Options → Security (tab). Then you can set the security level to Medium so you can choose to run the Phidget Examples: 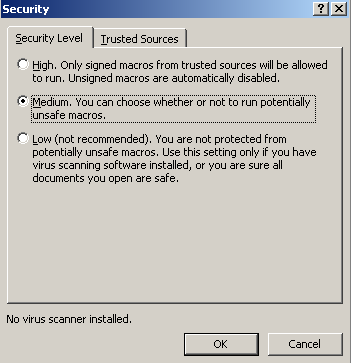 This will bring up the example itself. Hello and goodbye messages are printed to the screen as Phidgets are plugged in (attached) and unplugged (detached). Here, we plugged a Phidget Interface Kit in:

To begin, launch Excel with a new workbook for our project. Launch the VBA editor (Tools | Macro | Visual Basic Editor) and open “ThisWorkbook” in the navigator.

Before you can use the Phidget in your code, you must include the library in your project. This can be accomplished from the references screen (Tools | References...) by checking the box beside “Phidget Library 2.1”, or by browsing to the location the framework was installed and choosing the Phidget21COM.dll.

Afterwards, the Phidget object will need to be declared and then initialized inside the new workbook (“ThisWorkbook”). For example, we can declare and create a PhidgetInterfaceKit at the top of the code with:

The object name for any type of Phidget is listed in the API manual. Each Phidget (Spatial, Temperature Sensor, Motor Controller, Interface Kit) has a different software object named similarly to its own name. If you are not sure what the software object for your device is, find your Phidget on our webpage, and then check the API documentation for it. Every type of Phidget also inherits functionality from the Phidget base class.

You can now play around with the examples and basic code, and when you are ready to begin writing your project you can go through our instructional section on what code is in the examples.

Your main reference for writing VBA code will be our .COM API information, with syntax for all of our functions:

To learn the details behind opening, configuring, using, and closing your Phidget, try the General Phidget Programming page. That page also describes using the Phidget in an event-driven manner and in a traditional manner, both of which are available in VBA.

Specific calls in VBA will differ in syntax from those on the General Phidget Programming page, but the concepts stay the same.

It may help to have the General Phidget Programming page and this section open at the same time, because they parallel each other and you can refer to the .COM/VBA syntax.  However, many additional concepts are covered on the General Phidget Programming page on a high level, such as using multiple Phidgets, handling errors, and different styles of programming.

Be sure you have set up access to your Phidget in the section Write Your Own Code. That section also includes an initialization of the Phidget, i.e. a creation of the variable (phid) that will allow access to our Phidget, in this case an Interface Kit:

Also within that Sub, we can open the new Phidget variable:

Open will continuously try to connect to a Phidget, based on the parameters given, even trying to reconnect if it gets disconnected. There are many different forms of open - by serial number, or even over a network using the Phidget WebService. You can check the .COM API manual for all the types of open available and how to use them.

One important thing to remember is that when working with Phidgets, a local connection will reserve the device until closed. This prevents any other instances from retrieving data from the Phidget, including other programs. The one connection per device limit does not apply when exclusively using the Phidget WebService.

To use the Phidget, it must be plugged in (attached). This means that simply calling open does not guarantee you can use the Phidget immediately. We can handle this by using event driven programming and tracking the AttachEvents and DetachEvents, or we can handle this by calling waitForAttachment. This function works for any Phidget. WaitForAttachment will block indefinitely until a connection is made to the Phidget, or an optional timeout is exceeded:

We recommend the use of event driven programming when working with Phidgets. In Visual Basic, we hook an event handler with the following code:

With this method, the code inside onSensorChange will get executed every time the - in this case - Interface Kit reports a change on one of its analog inputs. You can let the editor generate the procedure declaration for you through the drop down menu at the top of the code window.

Some events such as Attach and Detach belong to the base Phidget object and thus are common to all types of Phidgets. Other events, such as this one to read a sensor change, are specific to the type of Phidget (for example, a Temperature Sensor would have a temperature change event). Please refer to the API manual for a full list of events and their usage.

Some values can be directly read and set on the Phidget, and inside polling loops used as an alternative to event driven programming. Simply use the instance properties such as SensorValue(Index as Long) or OutputState(Index as Long) for Interface Kits: