Difference between revisions of "What is VINT?"

VINT stands for Versatile Interface, and it's the system that all modern Phidgets use to communicate. Everything is backwards compatible and we still support all direct-to-USB Phidgets. A VINT Hub is a Phidget that has a number of VINT ports than can be used to connect to other Phidgets, or directly to switches, LEDs or sensors. The main advantages of VINT are versatility, modularity, connectivity and stability.

A VINT Hub Port is a versatile interface that combines the functionality of analog inputs, digital inputs, and digital outputs. It uses the same connector type as Phidgets Analog Inputs, so you can use the same sensor cables that came with those sensors. The mode of each port can be selected in software by creating a new object and opening it on the desired port. This allows for maximum flexibility and ensures that you can make the most of the ports on your hub. For information on the differences between VINT Ports and Analog Inputs, go to the Phidgets Connectors page. 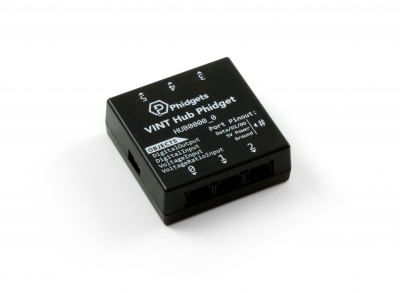 In the past, we needed to strike a delicate balance when it came to adding inputs and outputs to our Phidgets. Include too few, and users would need to buy additional InterfaceKits for their project. Add too many, and users would be forced to pay for the increased cost of the Phidget. Due to the versatility of VINT, you can program a VINT Hub's ports to behave as whatever your project needs. For example, if you only needed digital outputs, you could set all six ports to digital output mode. If you need more than six inputs or outputs, you can buy an intelligent VINT device to expand the number of inputs or outputs you have. The bottom line is that nobody has to pay for extra functionality they'll never use, and the users that need extra won't be paying any more than before since all of the I/O modules are competitively priced.

While the InterfaceKit was often the center of a Phidgets system, there were many Phidgets that were too complicated to connect through simple analog and digital ports: Accelerometers, LED controllers, motor controllers, and thermocouple adapters, just to name a few. As a result, larger Phidgets systems tended to sprawl, taking up several of your computer's USB ports and sometimes causing reach problems due to the maximum USB cable distance of 5 meters. This has all changed with VINT; intelligent VINT versions of these complicated Phidgets have been made, so you can connect them directly to a VINT Hub Phidget with ordinary 3-wire sensor cables. 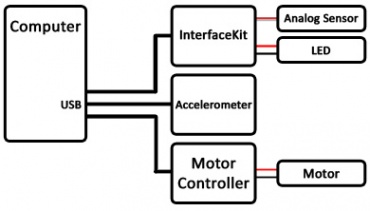 Of course, you can still use other USB-connected Phidgets alongside the VINT Hub Phidget if you want, and you can control both from the same program. 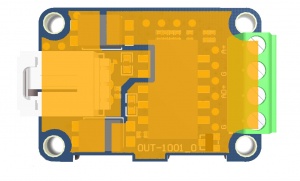 An example of isolation on a VINT device. The orange regions illustrate the two isolated halves of the board. The chips that straddle the halves on the top and bottom are optocouplers that transmit the communication from your PC to the processor on the board. The chip in the middle also straddles the two halves, but this chip has internally isolated these two pins from the rest of them.

Normally, an analog sensor operates by measuring its surroundings, converting that measurement into a voltage between 0 and 5 volts, and pulling its data line up to that voltage. The advantage to a system like this is that it's simple and usually compatible with other systems. One major downside, however, is how vulnerable this signal is to electromagnetic interference. A strong magnetic field produced by a running motor, the arc on a mechanical relay, or other mechanisms in the system can push the voltage on the data line up and down, resulting in inaccurate data. VINT communications avoid this problem by communicating using a protocol rather than a raw voltage. If the electromagnetic interference is great enough, the sensor may drop a data packet or two, but will soon resume sending data. This way, you can be sure that any data you receive is unaffected by interference.

Many VINT devices also come built-in with data and power isolation to prevent power fluctuations from entering the system. These fluctuations can cause unreliability by distorting reference values and in serious cases, damage parts of the system. These kinds of problems normally occur when multiple devices are powered by the same supply and current from the ground of one device enters other systems, or generally any application where small, sensitive components and high-power electronics need to coexist in the same system. An attached VINT device that has isolation built-in can be thought of an entirely separate circuit, since power is provided via a small transformer and data is transmitted with an opto-coupler.