A typical strain gauge would be designed such that minimal wire is in the non-sensitive axis compared to the overall length of the wire.

Strain gauges are devices used to measure strain on an object. They are attached to an object and as the object deforms under strain the gauge will deform with it. Strain gauges are designed to change resistance when they deform and by measuring this change in resistance strain gauges can be used to detect how much stress is being placed on the object. The most common way to measure the resistance change is through the use of a Wheatstone bridge circuit, which compares the voltage drop across changing resistance to a known resistance. The resulting voltage drop can be measured by devices like the DAQ1500 or 1046. Strain gauges are most often encountered not individually, but in pairs or quartets as part of a load cell. 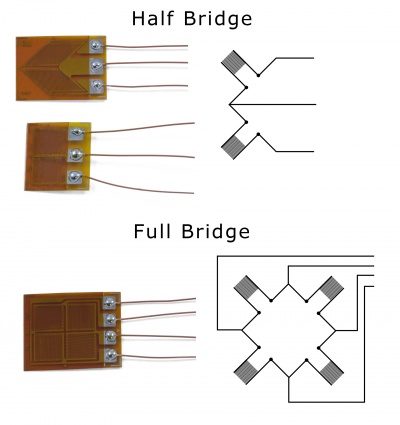 In order to make sense of the diagrams in this guide as they relate to your actual strain gauge, refer to this comparison image. As you can see, a half-bridge strain gauge contains two separate strain elements, while a full-bridge contains four. As the names suggest, two half-bridges or a single full-bridge are required to make a complete wheatstone bridge. In some cases, one half bridge can be replaced by resistors, as you'll see later in this guide.

Before going further, there is one thing that is important to remember: When this document refers to a strain gauge it means a single, 2 wire, gauge. All of what we sell are either half bridges, or full bridges. This means they are a collection of 2 or 4 individual strain gauges hooked up in a useful pattern. That said, you can always isolate a single gauge from the half bridge or full bridge by simply leaving some of the channels on the unit not connected. For example, a half bridge will have 3 wires, one for either end of the 2 gauge pair and one for the middle, where the two gauges connect. If you want to only use one of the gauges then you can simply connect leads to one of the end terminals and to the central terminal.

Measurements of radial force are done with a cantilever type spring element. For example, consider a straight metal beam protruding from a wall: 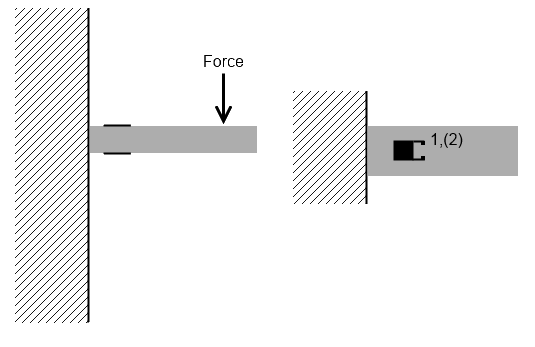 This set up is known as a bending beam transducer. It is important that the strain gauges be applied along the centre line of the spring element and they both the strain gauges on top and bottom be placed an equal distance from the fixed point (in the image, the wall). The gauges should be installed fairly close to the fixed point in relation to the length of the beam. The cantilever beam as shown above is somple to design and fabricate and makes installing strain gauges fairly easy. It is also fairly immune to loads applied in axes other than the intended measurement axis. The main problem with the cantilever style is that beam can bend and cause distorted readings. One solution is to make the beam thinner around the strain gauges. This will focus the strain to this specific region of the beam and minimize bending in the rest of the system. For example: 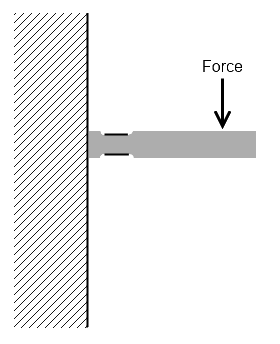 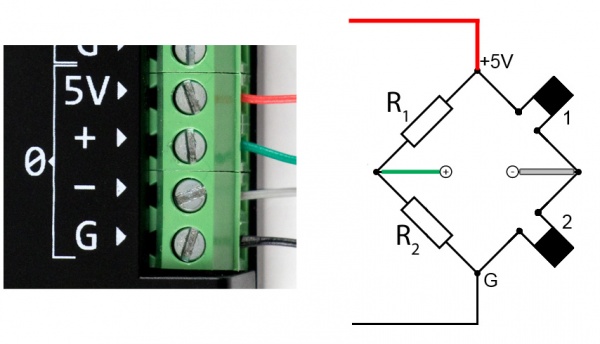 Where R1 and R2 are two resistors of the same resistance. We recommend using high-precision resistors because variance in the resistance values can affect the accuracy of your readings. +5V, +, -, and G are the 4 terminals on your Phidget's bridge terminal. And 1 and 2 are the strain gauges as labelled on the drawings above. For this configuration you will want to use individual strain gauges. You can use a half bridge on top and bottom and only connect one of the gauges to achieve this.

To measure axial force (either tension or compression) a column load cell is used. 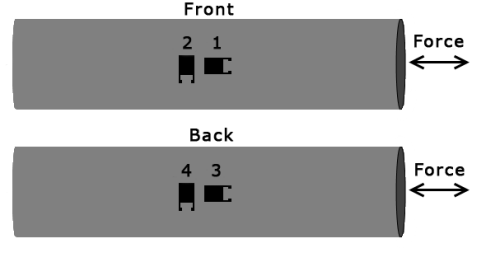 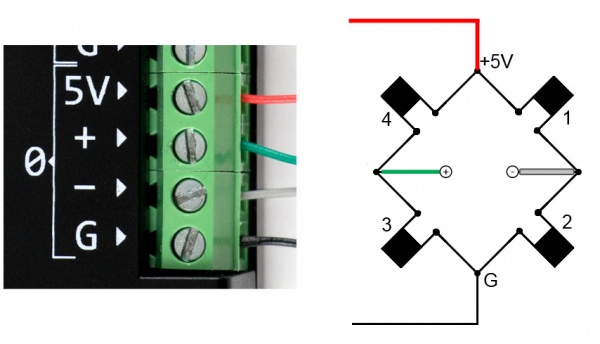 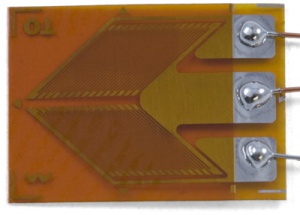 Strain gauge intended for measuring torque. Notice that the resistive tracks are at 45° angles. 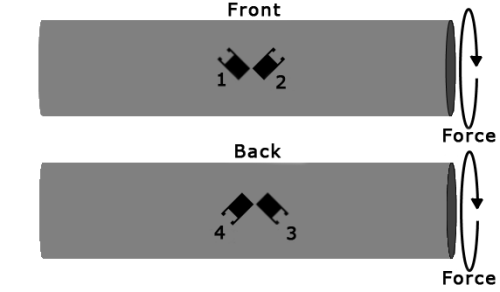 Making sure the gauges are installed with their center exactly on the spring elements center line is important. The strain gauges connect to the Phidget in a full bridge pattern as follows: 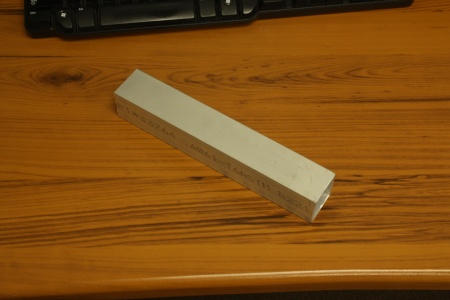 Once you have decided generally where you want the strain gauges to be mounted it is time to attach them to the surface of the spring element. This is the part where patience and precision pay off, as the more accurately you can line up the strain gauges, the more accurate your measurements are going to be. For this guide, I will walk through all the steps required to install a strain gauge on a bare piece of scrap aluminium we had kicking around the office.

The first step is to use some sand paper or steel wool to rough up the surface of the spring element. Since we are going to be using glue to hold the strain gauge in place, we want to ensure the best adhesion possible. Not only does sanding the metal a bit remove any foreign material from the surface, it also increases the surface area exposed to give the glue more to grab on to. Once you have done this make sure to clean the area well. Any powder left behind needs to be removed before we move forward. We recommend using a bit of rubbing alcohol since it will evaporate quickly and not leave any residue behind that might interfere with the glue curing process. We need to mount the strain gauge as close to the center of the spring element as we can manage. Measure the width of the spring element with the most accurate tool available to you. When gluing the strain gauge to the surface of the spring element, line it up as best as you can with the mark you made previously. In this case we have split the half bridge gauge we are using horizontally. Depending on your set up you may want to split it vertically over the line or only line up a single gauge (quarter bridge) on the line etc... Make sure you know exactly how the gauge needs to be lined up before you stick it on. The super glue is not going to give you a lot of play once you apply the gauge. 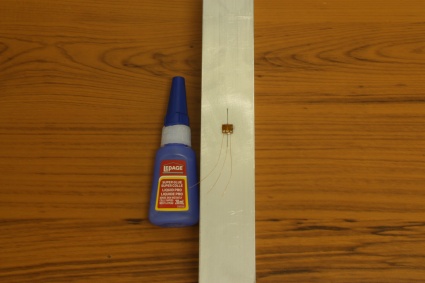 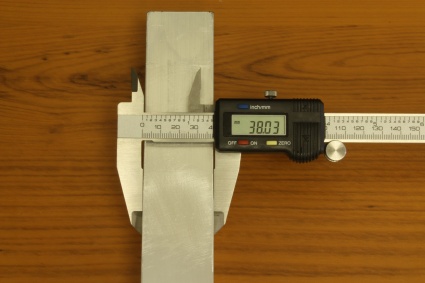 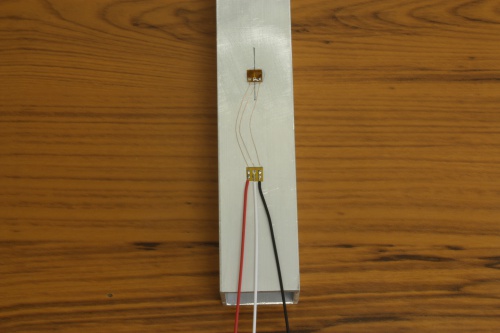 Finally, we will want to protect the strain gauge some how. Covering the whole assembly in some kind of protective coating is common practice in commercial load cells. I used epoxy resin in this case but silicone would also work. Just make sure that whatever you do end up using isn't conductive! 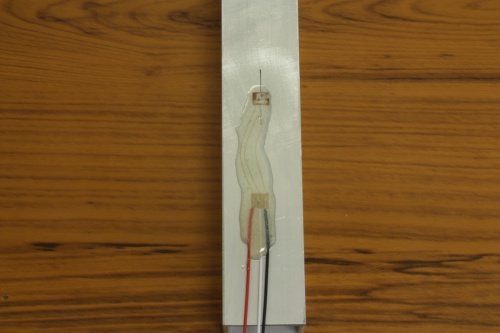